I remember the first time I ever heard about Trinidad & Tobago. When I was a young boy, my grandfather gave me a stamp collection that he had started … the pages of those albums contained mementos from countries all over the world, many of which I had never known existed and I could only guess where they were or what they were like. For some reason (fate?), the island nation of Trinidad & Tobago caught my attention in a way most others didn’t. I remember letting the name roll off my tongue, then looking it up in a copy of the 1987 World Almanac that I kept in my room – learning all kinds of interesting facts that formed the first picture of this exotic place in my imagination. Little did I ever think that I might one day travel to these beautiful islands – let alone lead regular birding tours there!!

This is just one of the stamps from Trinidad & Tobago (1969) that caught my attention as young boy (not all of them had birds!). It’s amazing that this birding paradise is now a regular destination for this lucky tour leader!

This past December, I returned to Trinidad & Tobago for my second birding tour with Eagle-Eye Tours. These two islands, located off the coast of Venezuela, provide a great introduction to the incredibly diverse birds and other wildlife of South America. Given the relative small size of the islands, we are able to stay at just two places for the entire tour and enjoy a relaxed pace – but with no shortage of great birds and other highlights! Below are some of the photo highlights from our 2017 adventure – and check out Part 2 of this blog post here.     (You can also check out lots more photos and details from our 2015 tour on an earlier blog post here.)

For the first week of the tour, we stayed at the world-famous Asa Wright Nature Centre. The view from the verandah, looking down over a mountain valley and the distant town of Arima, becomes the backdrop to so many of our great birding experiences.

The incredible number, diversity and brilliant colours of the birds visiting the gardens and feeders all around the verandah can be overwhelming at first. Purple Honeycreepers are one of the first birds that most guests notice – and for obvious reasons! 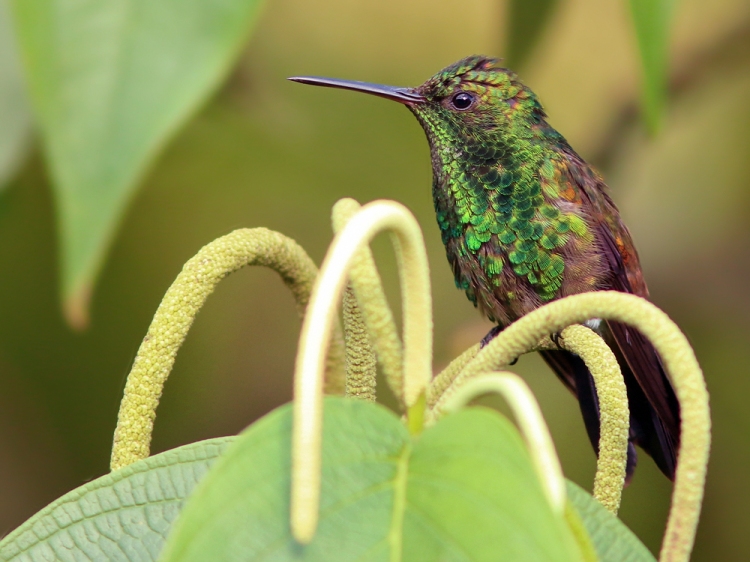 Dozens of hummingbirds can be spotted buzzing around the many feeders and flowers – often just inches from the happy faces of birders. Copper-rumped Hummingbirds are the most abundant and while they may seem a little less flamboyant than some of the other species, they sure can look amazing in the right light. 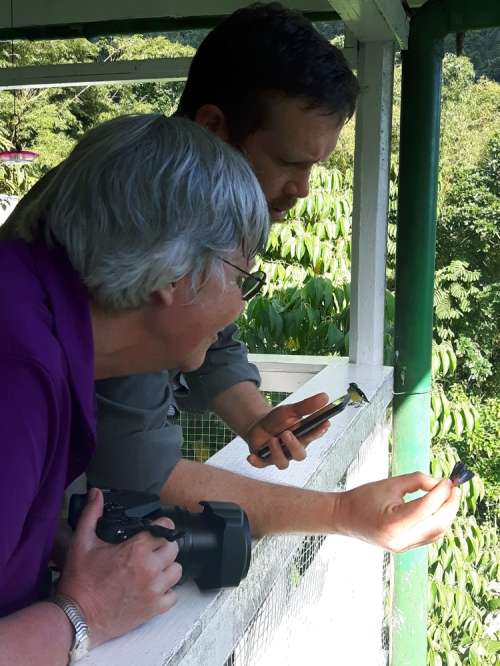 Here, my co-leader Ernesto Carman holds a Copper-rumped Hummingbird that I “rescued” from the verandah. There are lots of fun learning opportunities in the tropics! 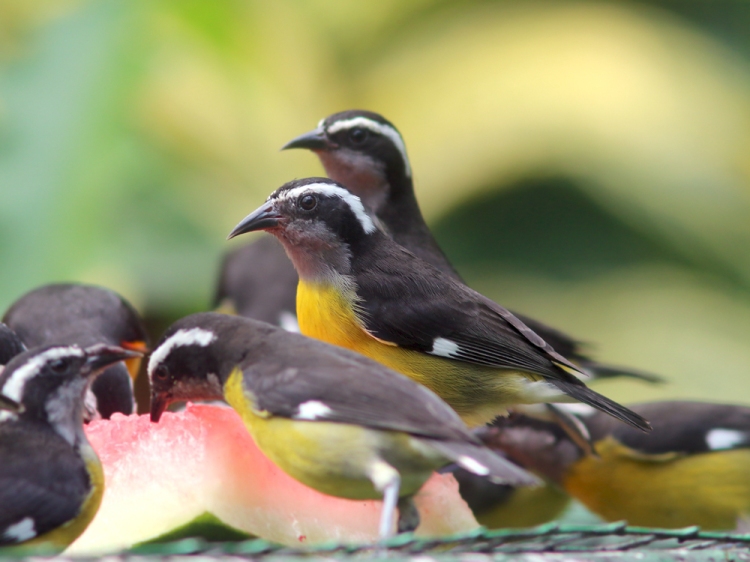 Bananaquits are no doubt the most common bird we see in Trinidad & Tobago. Here they are enjoying some fresh fruit provided by the AWNC staff. Many birds come to partake in these sweet offerings. 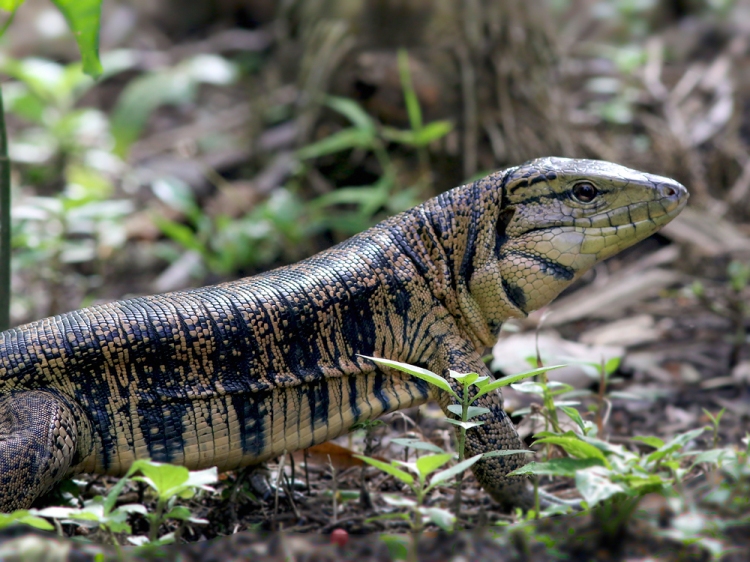 And it’s not just the birds … butterflies, Red-rumped Agoutis and menacing-looking Golden Tegu Lizards (like this one) can often be found hanging out around the feeders looking for fallen treats. 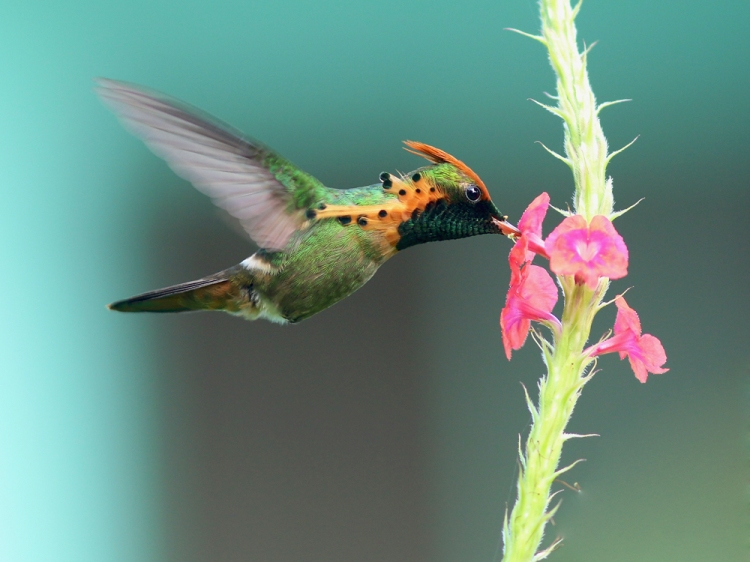 The abundance of flowering plants around the property also attract many birds – some of which avoid feeders altogether. The tiny (yet showy!) Tufted Coquette is one of the most sought-after hummingbirds in South America, and we encountered several visiting the abundant vervain flowers at Asa Wright – perhaps the best and most reliable place to see them anywhere. 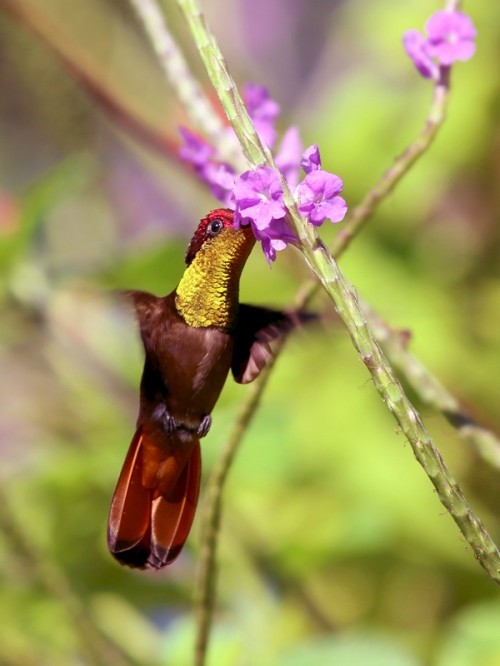 Somewhat less expected, but equally stunning, was this brilliant Ruby Topaz Hummingbird we discovered just outside our cabins. This incredible species is uncommon on Trinidad at this time of year, although we do expect to see it on Tobago. This one is showing off its amazing colours on a very sunny afternoon. 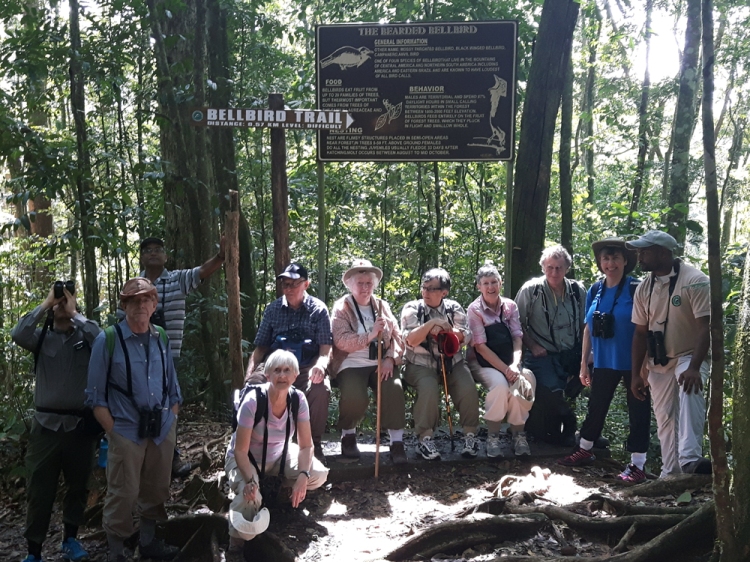 The lodge and property also has great walking trails through the forest. Here you can see our wonderful group taking a  break after some fantastic birding on the Discovery Trail (and yes – we found the Bearded Bellbird!). 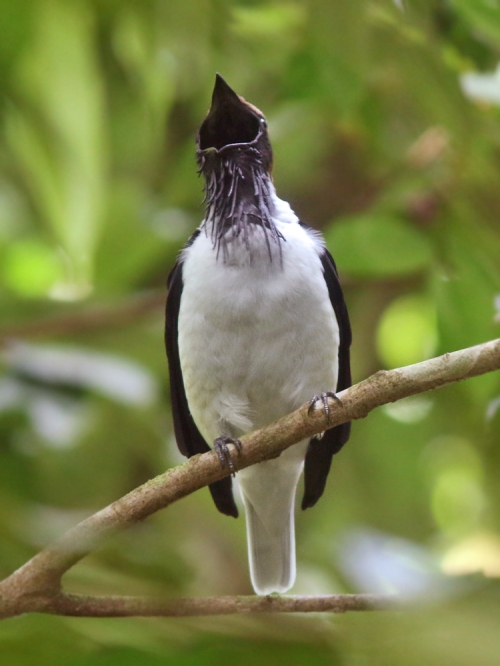 Bearded Bellbird is one of the most exciting birds that can be found on the AWNC trails. Considered the loudest bird in the world, their deafening “gong” calls travel for miles and can often be heard echoing up the valley. We had the great fortune of finding this one on a relatively low perch, where we learned just how loud its voice could be!

Check out this short video I took of the Bearded Bellbird giving its loud call:

Another fun bird that can be found on the local trails is Bearded Manakin. Like other manakins, these spunky little birds have very entertaining courtship displays, and we really enjoyed watching several males making their “click” sounds (like fingers snapping) and buzzing around the local lek.

We also found several Golden-headed Manakins nearby, but they stayed in thick cover and were a challenge to photograph. Next time 😉

There are always lots of interesting plants and flowers to see, as well. One of my favourite flowers found along the trails is Psychotria poeppigiana – playfully called “hot lips”. Can you see why?

When birding in the tropics, we are always on the lookout for army ants. The frenzy of other little critters trying to escape an army ant swarm often attracts a variety of birds – so besides the already cool experience of watching these tiny gladiators at work, it can also lead to a great birding experience. I ran into two such swarms this trip – and one of them was being attended by some great birds.

Here’s a short clip of another Army Ant swarm that I found myself nearly stepping in: 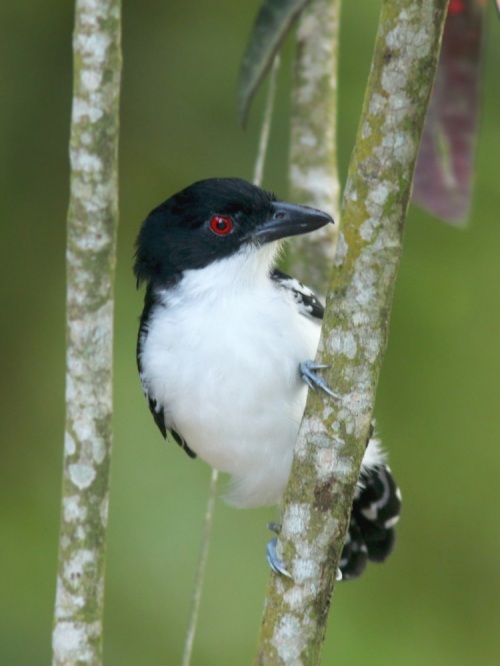 One of the many tropical bird species that specialize in following ant swarms is the Great Antshrike. This male was part of a pair hanging out near the main lodge at Asa Wright Nature Centre. 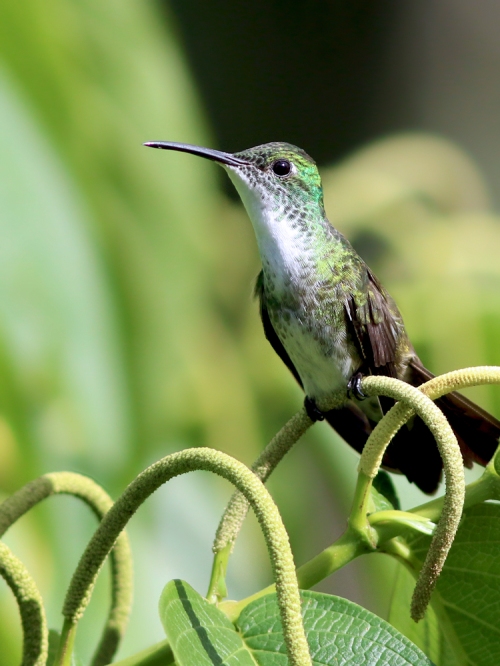 Another common hummingbird at the ever-busy verandah was White-chested Emerald. Beauty in simplicity.

This short video gives a glimpse of how busy the hummingbird feeders are — all the time!

Even after dark, the verandah can be a great place to hang out. As the birds disappear, Long-tongued Bats show up to take the night shift at the hummingbird feeders. Check out that tongue!! It’s amazing how adept these bats are getting at the sugar-water.

Exploring after dark in the tropics can be just as exciting as daytime. One great find was this large (probably female) Trinidad Chevron Tarantula – an endemic species to the island. 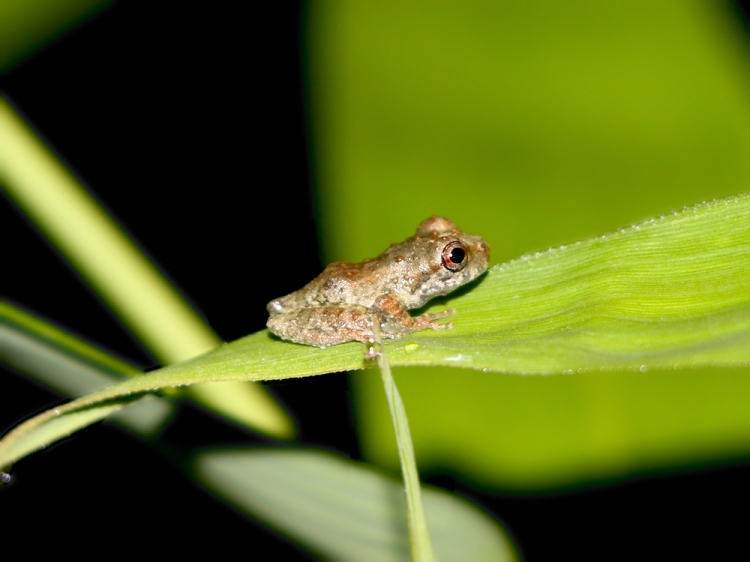 Among several species of frogs seen at night was this tree frog (species TBD) – a tiny little thing no bigger than 15mm. 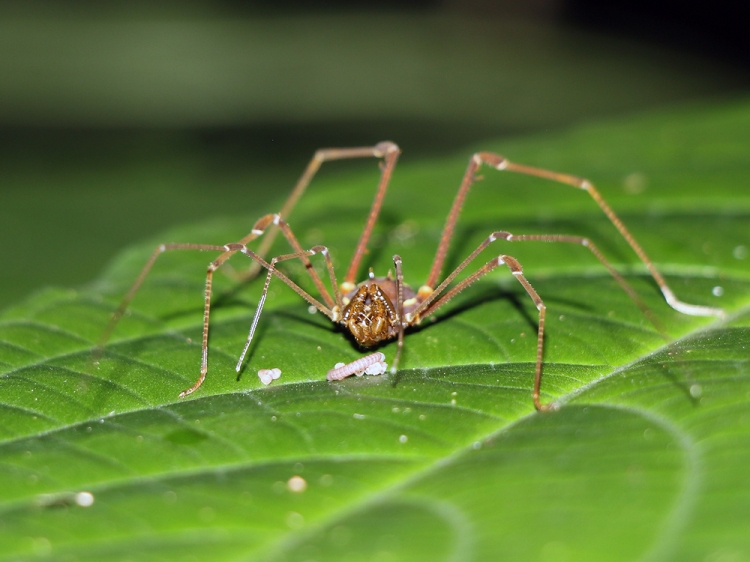 Lunchtime! A Harvestman is enjoying a late night snack. 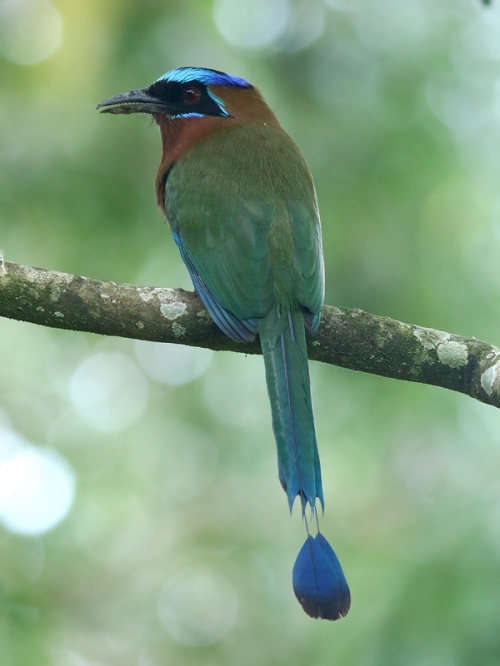 The Trinidad Motmot is an endemic species, and its “whoop” calls are very recognizable when heard. These shy birds can be a challenge to spot on Trinidad itself, but are surprisingly much more cooperative on Tobago (although we encountered them in both places). Check out that tail … and the serrated bill! Motmots can and will eat just about anything from fruit to snakes.

Another common (and noisy!) visitor to the gardens at AWNC is the Crested Oropendola. These raucous birds are named for their hanging “pendulum” nests, which we spotted at several locations during the week.

The varied and bubbly calls of Tropical Mockingbirds were also a common sound during the trip – not just at Asa Wright, but pretty much everywhere.

We found eight different species of tanager throughout the trip – six of which could be spotted right from the AWNC verandah. While White-lined Tanagers were not the most colourful, they were certainly the most common and widespread. 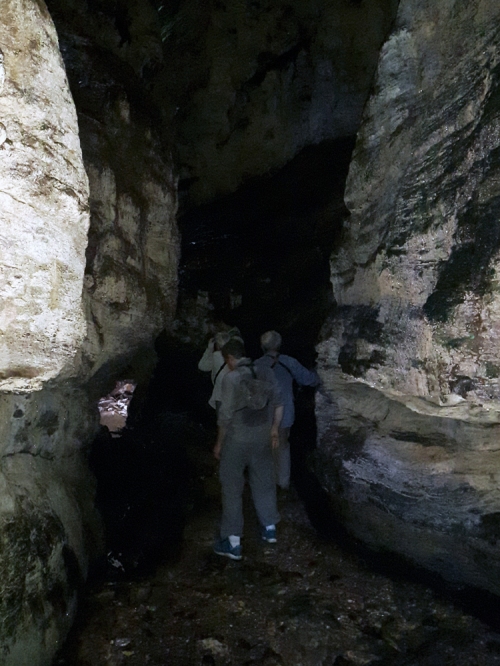 One of the most unique experiences of the tour was our trek to the Dunstan Caves, which are home to a colony of amazing Oilbirds. The hike itself is beautiful, but the surreal birding experience that awaits is unlike any other.

Using a flashlight, we were able to spot several Oilbirds roosting just inside the cave entrance. These almost mythical birds are the only nocturnal fruit-eating birds in the world, using a combination of echolocation (just like bats!) and specially adapted eyesight to navigate in the dark. They live in caves, and produce the most guttural, haunting sounds you can imagine. What a surreal experience – and a highlight of any visit to Asa Wright Nature Centre.

Just outside the cave, we spotted numerous Trinidad Stream Frogs. This is an endemic species, and always a treat to find. It was our second sighting of the week!

Trogons are highly prized by birders, and we were fortunate to see all three species that live in Trinidad & Tobago. By far the most photogenic was this male Guianan Trogon which sat out in the open for several minutes, probably just as curious about us as were of it. 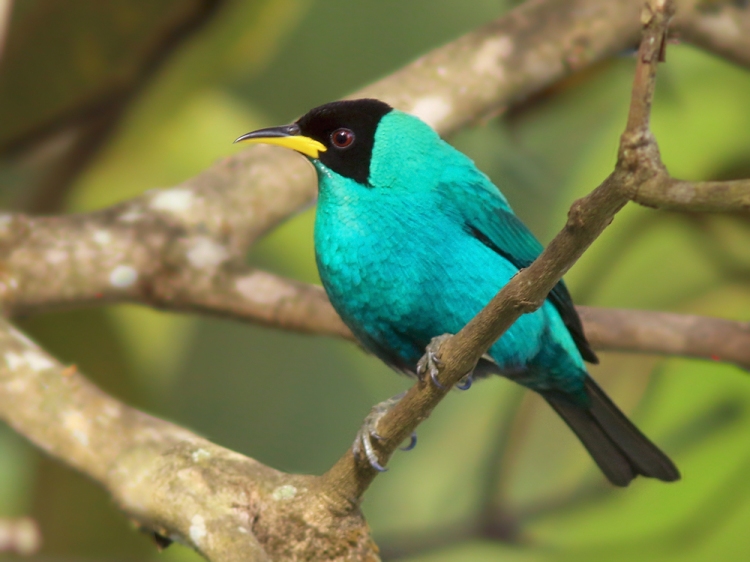 Green Honeycreepers might be overlooked amid a flock of more brightly coloured birds, but they certainly hold their own in the “classy” department. These beautiful birds were daily visitors throughout the tour.

A Ferruginous Pygmy Owl could be heard calling around the Asa Wright Nature Centre every night and early morning, but it wasn’t until one of our excursions that we saw our first one. This little owl seemed completely unfazed by the frenzy of smaller birds mobbing it – a flurry of activity that helped us find it hiding in the trees.

We also encountered stately Savannah Hawks during our excursions to lower elevations. As their name suggests, these lovely raptors are denizens of large open areas and grassy fields, often associated with agricultural operations. 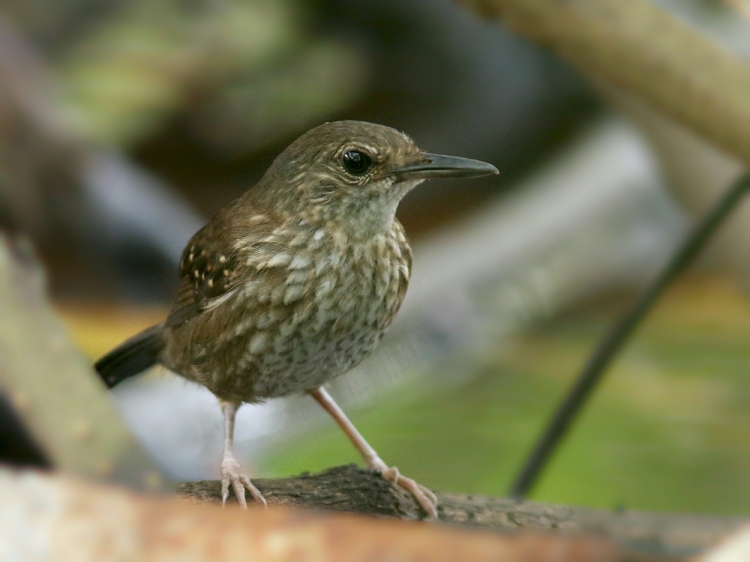 Much more difficult to spot was this female Silvered Antbird. This is a very shy bird of the mangroves, and we were very fortunate to have a pair show themselves for us on Trinidad’s eastern coast at Nariva Swamp.

Just across the road, we found this other mangrove specialist – Northern Scrub Flycatcher. This section of mangrove produced a number of other great birds during our visit – Red-rumped Woodpecker, American Pygmy Kingfisher, and Black-crested Antshrike among them!

It was hard to ignore the butterflies, including this Two-banded Satyr that we found on one of our hikes along the Discovery Trail. Life abounds everywhere you look in the tropics. 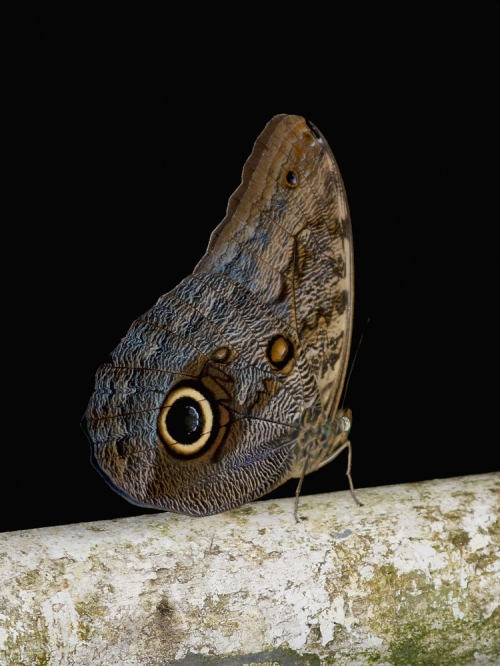 One of the most spectacular butterflies we found was the large Illioneus Giant Owl – aptly named not only because of the large “false eye” it uses for disguise, but also because it emerges mostly during the dark hours between dusk and dawn.

Check out Part 2 of this blog post for lots more photos and highlights from the rest of our amazing tour!