Hurricane birding at Cape Race. The weather cleared quickly as Gonzalo churned past just east of us, but the waves were spectacular!

It was 0530 this morning when Ian Jones and Bruce Mactavish (aka “one of North America’s most renowned birders”!) picked me up at home. Hurricane Gonzalo was churning just SE of Newfoundland and radar indicated it would zip past Cape Race in just over an hour. Our plan was to meet it there! 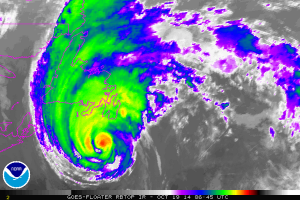 Gonzalo, still a Category 1 hurricane, ripped by just miles east of Cape Race in the early morning hours of Sunday, October 20. We were there to meet it.

It was a two hour run, and we made great time considering the driving, horizontal rain. The winds were picking up fast, first gusting from the east and north east as the storm approached us, but by the time we reached Portugal Cove South (just 21 km from Cape Race), they had switched around to the northwest – a clear indication that the eye had passed north of us.

Long story short, we arrived at Cape Race to clearing weather and high winds (gusting to 100km/h). We spent the next few hours scanning the water hoping for subtropical seabirds dragged up by Gonzalo, but were sadly disappointed. Good numbers of local seabirds like Northern Gannet, Black-legged Kittiwake and White-winged Scoter were battling the wind and waves, but nothing out of the ordinary. Later in the day we checked out points further west and southwest – Cripple Cove, Portugal Cove South, Trepassey, St. Shott’s and Point LaHaye — all offering up the same disappointing results.

Two significant, and disappointing, factors made Hurricane a bust when it came to birds. First, they eye of the hurricane passed by just east of Cape Race instead of making landfall. Any subtropical seabirds in its midst may have carried on NE with the storm rather than falling out along our coast. Secondly, while the winds looked good initially (see the 3am windmap above), they quickly turned to the northwest as the eye passed Cape Race (see 9am windmap), resulting in offshore winds that would have kept seabirds offshore and out of our sight.

However, the wave action was incredible, with waves that must have been 15+ metres at times rolling, breaking and crashing in spectacular fashion. This is one of the most amazing coastlines in the world, and seeing it in this way just made it better! 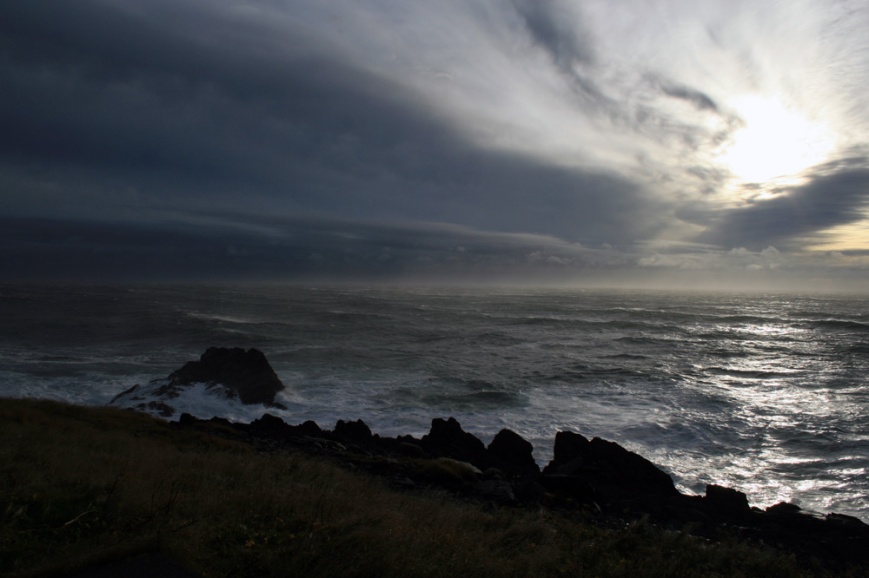 Cape Race shortly after sunrise and the passing of Hurricane Gonzalo.

Bruce Mactavish (“one of North America’s most renowned birders”) enjoys the action.

Ian Jones trying to see some rare seabirds through a wall of water!

These pics may be a bit deceiving – but our vantage for these photos was actually on a clifftop probably 10+ metres above sea level, and the waves were often crashing above our eye level!! 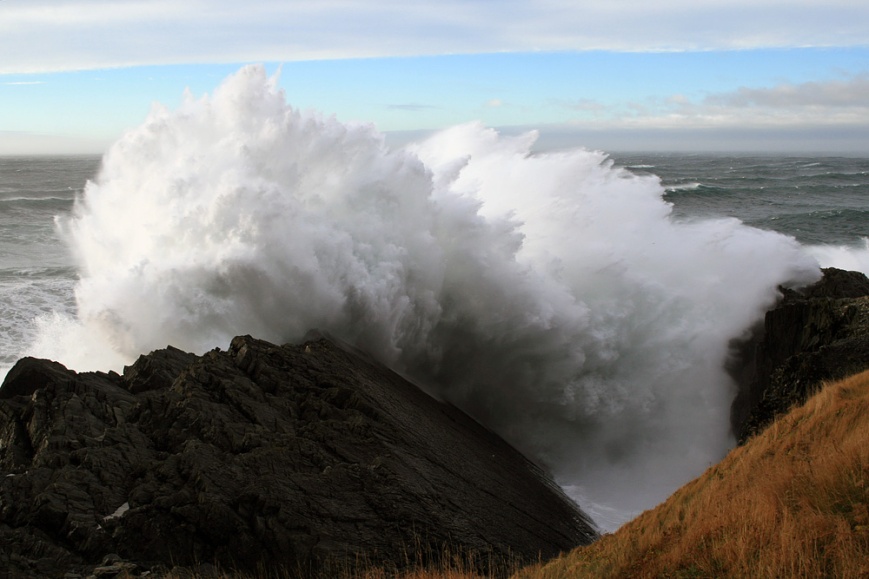 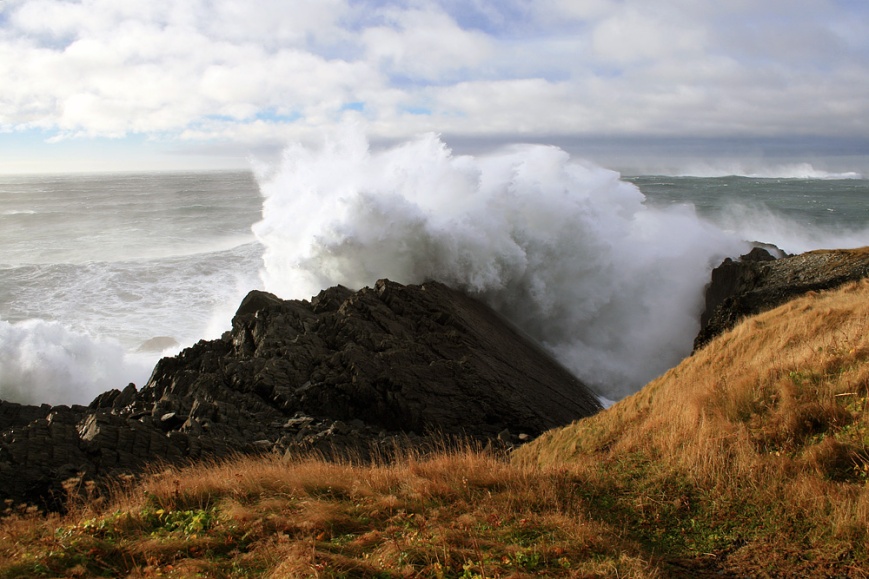 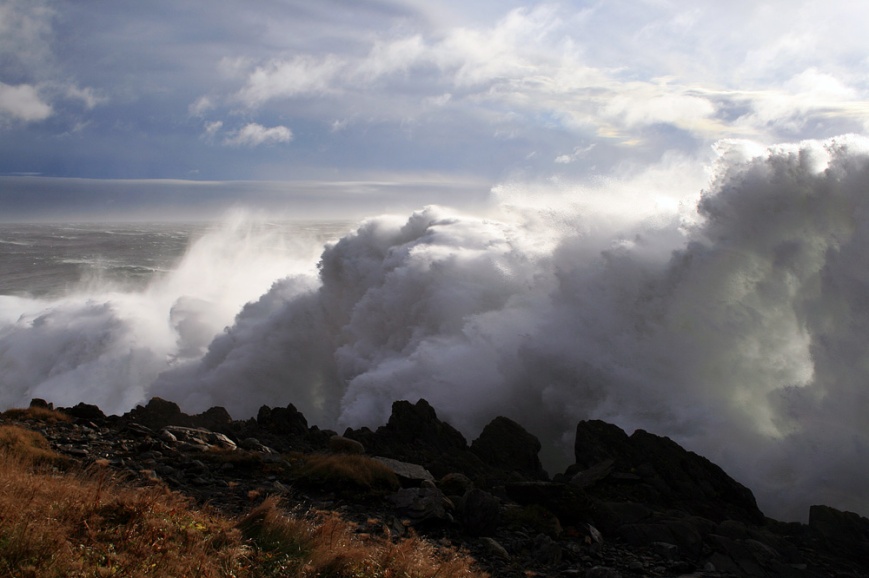 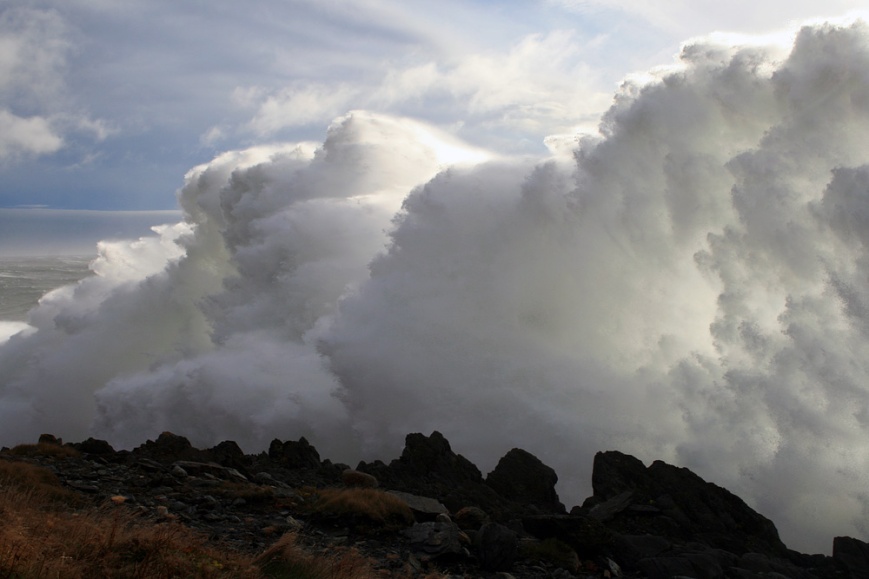 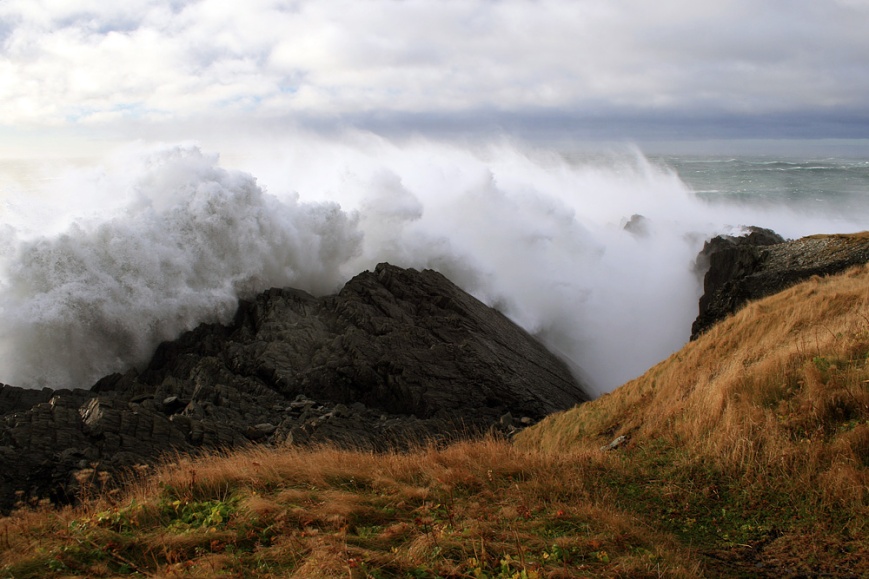 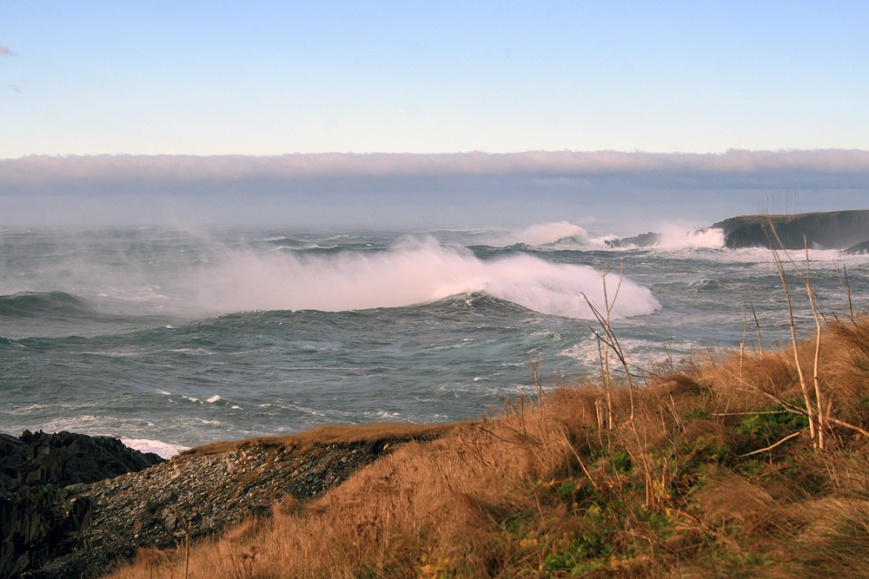 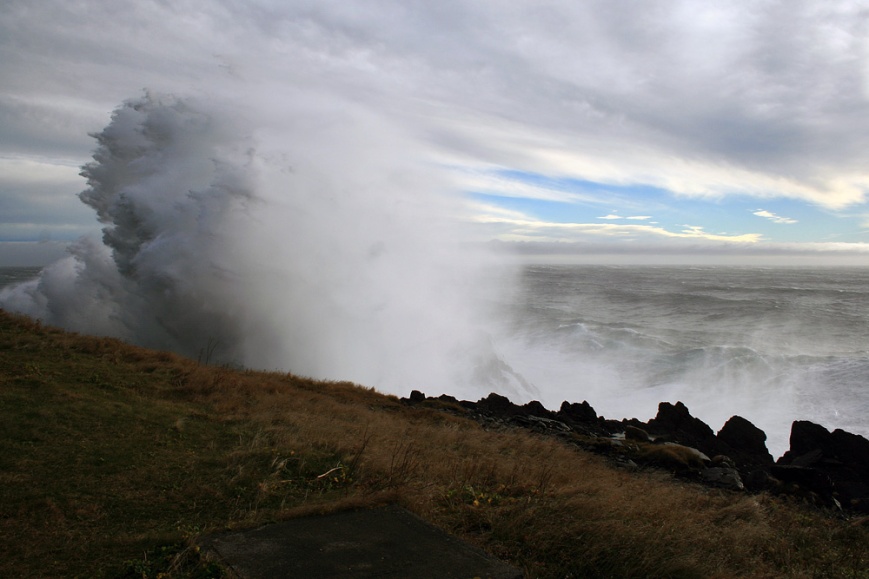 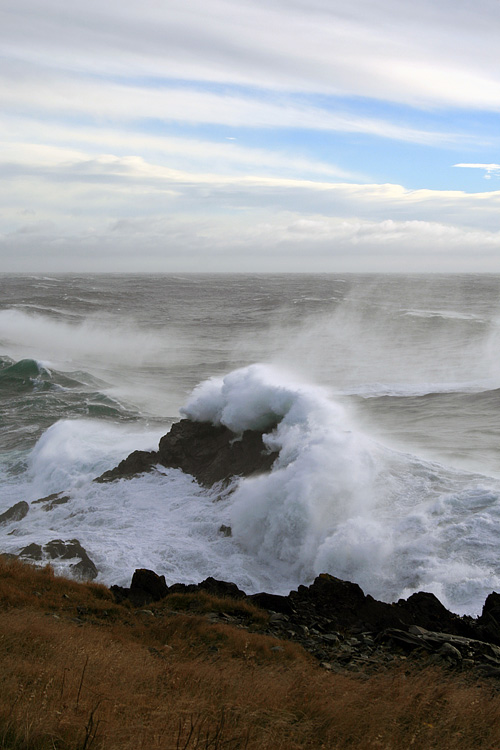 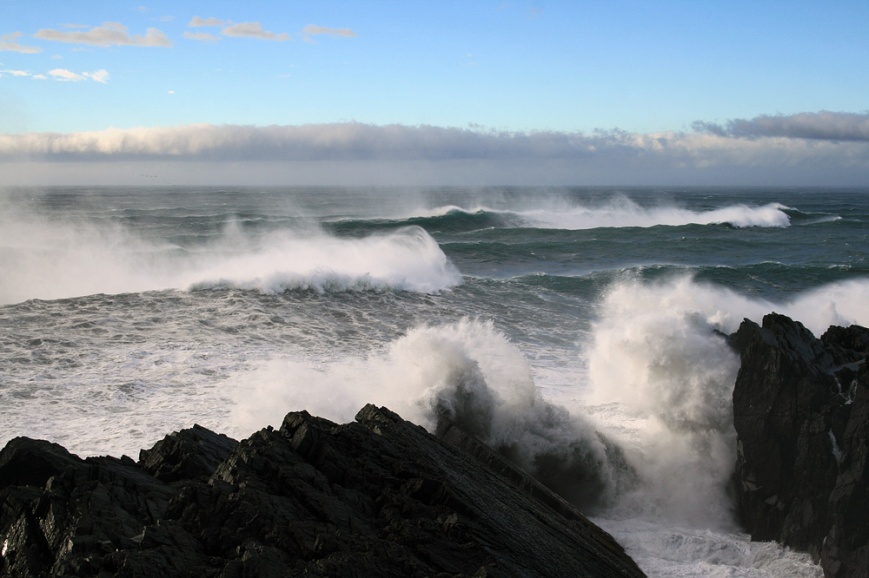 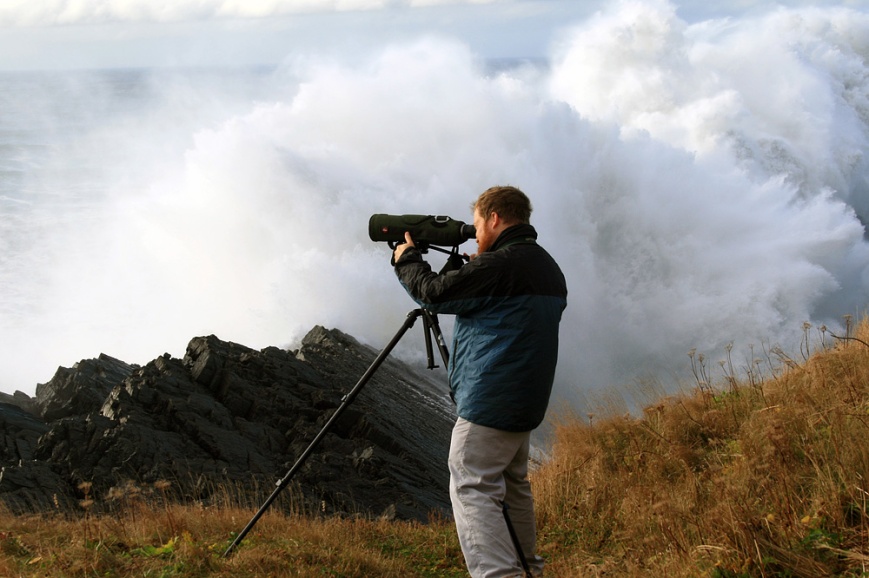 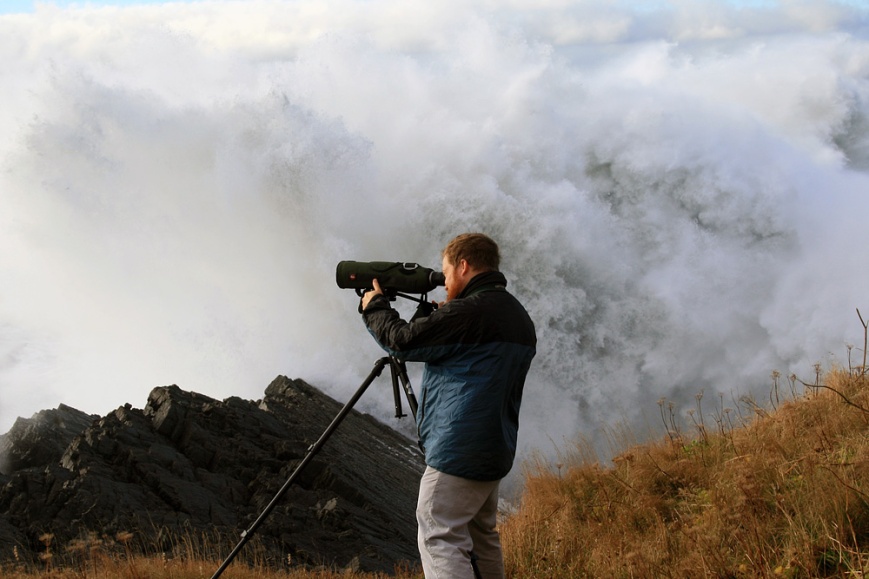 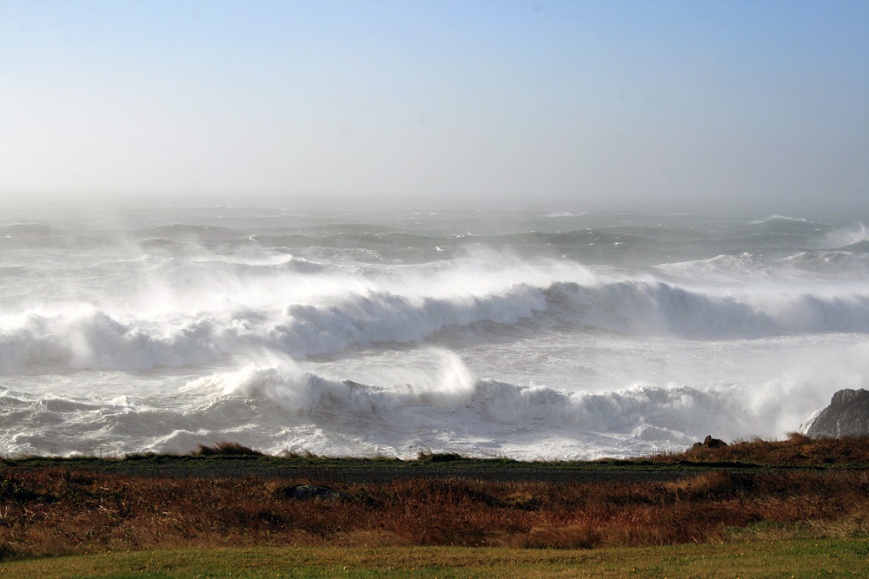 One thought on “Hurricane Gonzalo – Big Waves, No Birds”