** This is the second installment about the recent Eagle Eye Tours trip I co-led in Trinidad & Tobago (December 2015). Click HERE to read the first post **

As mentioned in my previous post, much of our time on the island of Trinidad was spent on and around the beautiful (and very birdy!) Asa Wright Nature Centre. We thoroughly enjoyed the large property, incredible veranda, and wonderful trails that were available to us while staying there.

Long-billed Starthroat was one of the more uncommon hummingbirds on the island, although several could be found frequenting the feeders at Asa Wright Nature Centre.

Crested Oropendola was one of the most abundant and conspicuous birds around the estate, and their raucous calls and behaviour became the backdrop for lots of amazing birding! 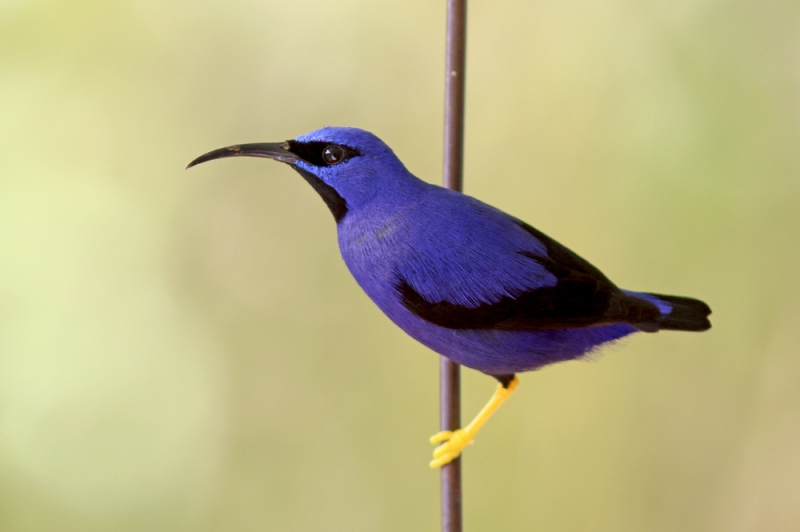 Despite being abundant throughout the property, and lots of other places we visited, it was impossible to overlook the beautiful Purple Honeycreeper. Centre staff said they were in larger than normal numbers this year. 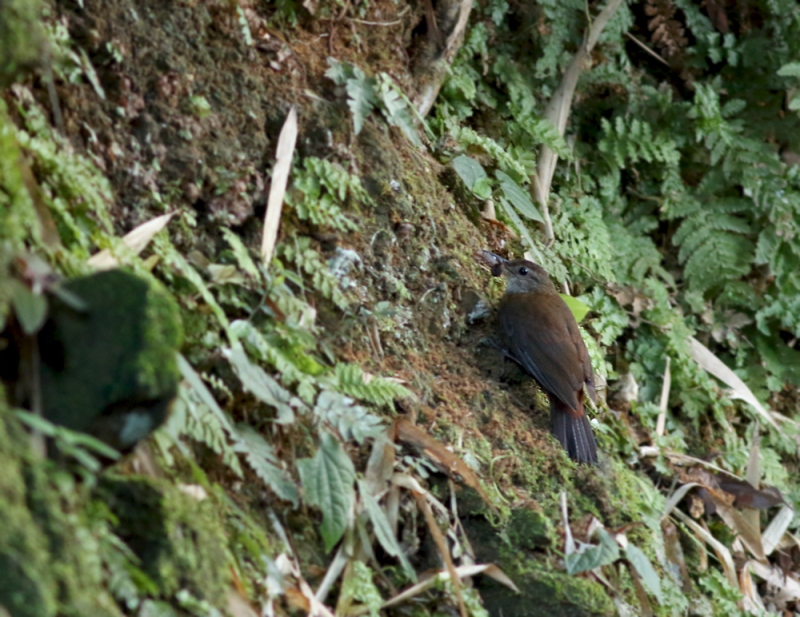 Not all the birds we enjoyed were as gaudy, easy to find or possible to photograph. Gray-throated Leaftosser is very dull, skulky and secretive – and not always seen on tours. Not only were we able to get the entire group on one such bird, but several of us had multiple encounters and Jody & I even found a nest!

And neither was the brilliance restricted to the birds. We enjoyed many beautiful butterflies, not the least of which was this amazing Blue Transparent (Ithomeia pellucida).

Less endearing to some, this endemic Trinidad Chevron Tarantula (Psalmopoeus cambridgei) was making itself at home in the centre’s main house. We saw it every day, although I never quite got used to the idea that it could be anywhere. 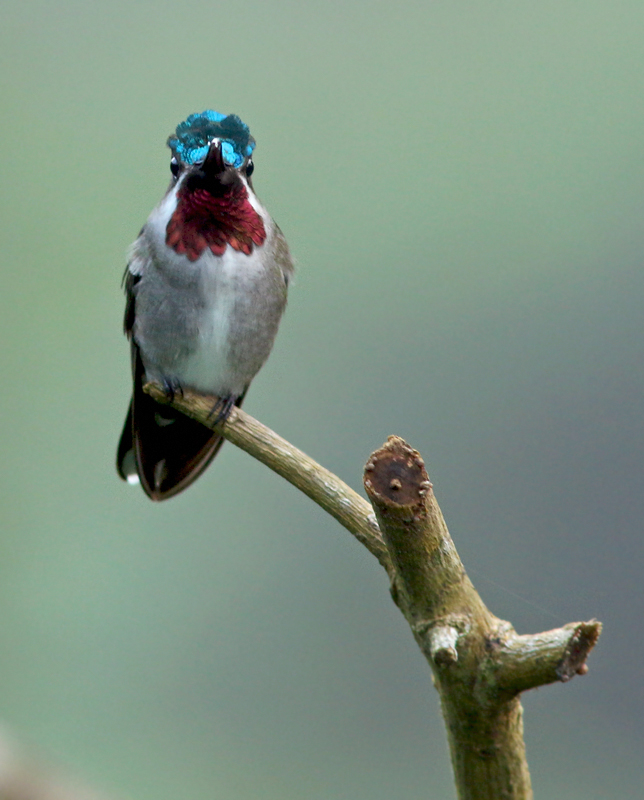 Another view of the Long-billed Starthroat. The hummingbird feeders and their many patrons never got boring! 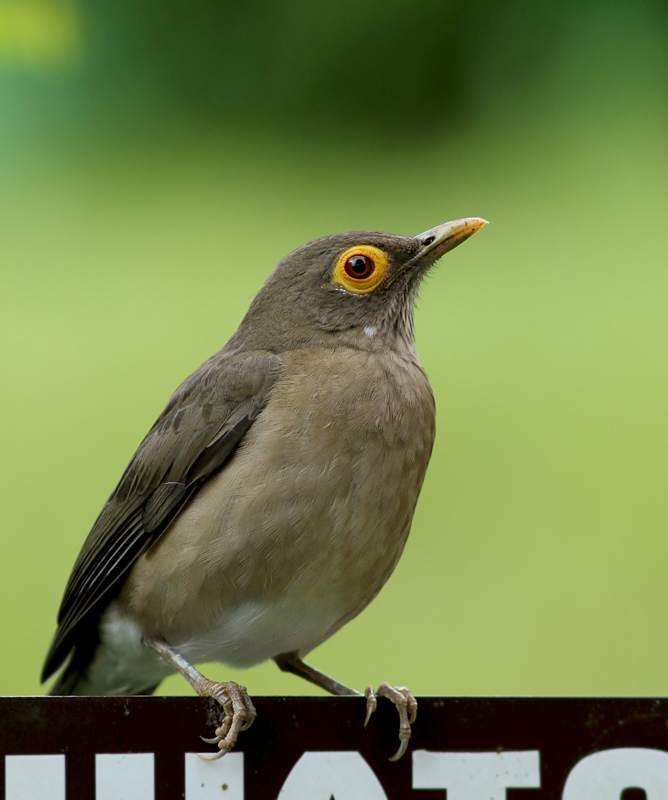 Though less colourful overall, I always enjoyed seeing a Spectacled Thrush and its permanently “surprised” look!

Going out after dark also produced some very interesting creatures, including the Trinidad Mountain Crab (Pseudotelphusa garmani). For a boy that grew up beside the ocean, there was just something strange about seeing crabs away from water and well up in the mountains!

Another nocturnal creature I enjoyed seeing was the Tailless Whip Scorpion. These are harmless, of course, and not even a real scorpion – but a tad creepy just the same!

Asa Wright Nature Centre was also an excellent base from which to do day-trips, taking us to a range of habitats and amazing birding areas throughout northern and central Trinidad. We explored montane rainforests, grasslands, wetlands and even coastal swamps and fishing harbours – finding lots of great birds and other wildlife everywhere! And the scenery. 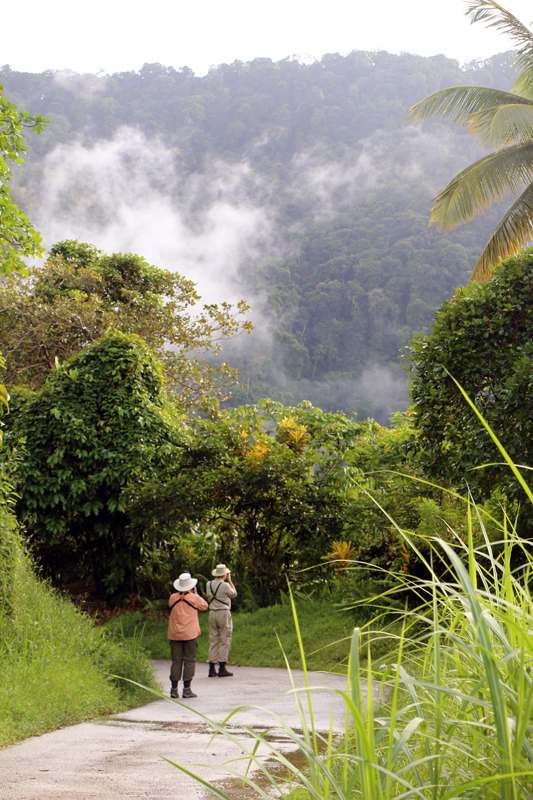 Birding in the rainforests and higher elevations of the Northern Range was definitely a highlight. We got to see some amazing vistas and lots of great birds along the winding mountain roads.

We regularly saw Common Black Hawks soaring overhead or down in the valley, but seeing them perched gave them an even more majestic look. Surveying his kingdom!

An unfortunate case of “Stellar bird, crappy photo”! This male Guianan Trogon obliged us by sitting right out in the open – amazing looks, but hard light for photography. Ah well … 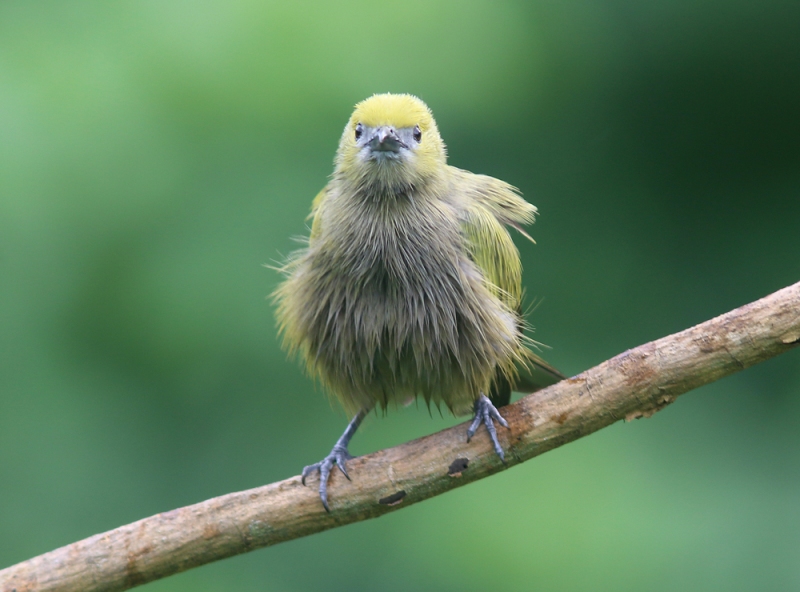 Palm Tanagers were abundant and easily overlooked … but this bright male was quite entertaining after taking a bath.

The lush rainforests of the Northern Range were full of life, though it was often hard to spot. Birding here was a tangled mess of fun and frustration – but mostly fun. We scored a lot of great birds! 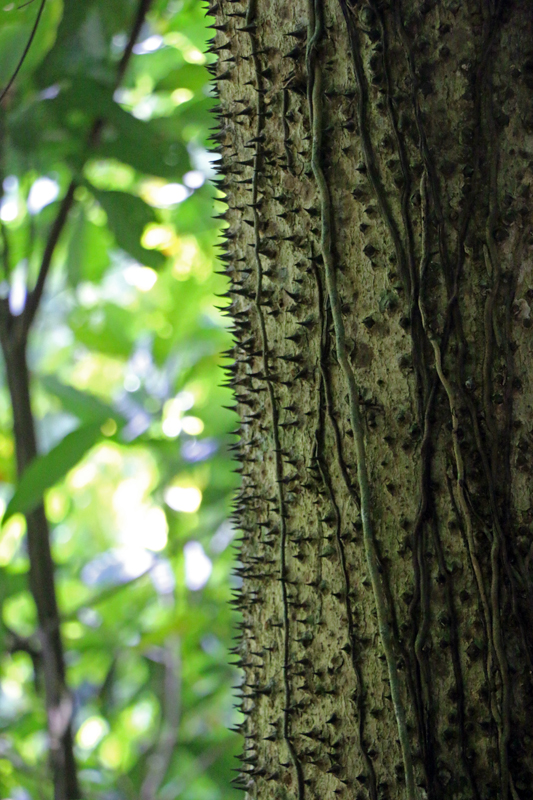 One of my favourite trees that we encountered (though luckily never fell against!) is the Sandbox Tree. It is covered in thick, very sharp spikes, contains poisonous sap, and produces a fruit that actually “explodes” when ripe to disperse its seed! Trees can be cool.

We found this well-camouflaged Streaked Flycatcher while birding along the Blanchisseuse road. Amazingly, everyone got great looks!

Another striking butterfly, the White Lycid (Arawacus aetolus) has very different patterning above (white) and below (beautifully and colourfully striped).

While all of our excursions were exciting, there is always something special about night birding. We visited an agricultural centre one evening to look for nocturnal species and were not disappointed. The first birds we found were a pair of Tropical Screech Owls – one of which sat obligingly for a few minutes before heading off to hunt. We also spotted a Barn Owl nearby.

We also found a number of Common Pauraque (above), White-tailed Nightjars and one Common Potoo hunting and sitting on various perches.

A daytime visit to the same area produced a good variety of grassland and wetland species, including the very classy-looking Southern Lapwing.

We found a pair of Pied Water-Tyrants in the wet, muddy fields of the agricultural centre. The male looked quite dapper, I thought!

Cattle Egrets were abundant in the wet open fields of Nariva Swamp. What do you think that one egret is looking at?

We also encountered a few Spectacled Caiman, including this fella chilling out near the road in Nariva. The name comes from a bony ridge between the eyes, which can give a spectacled appearance. 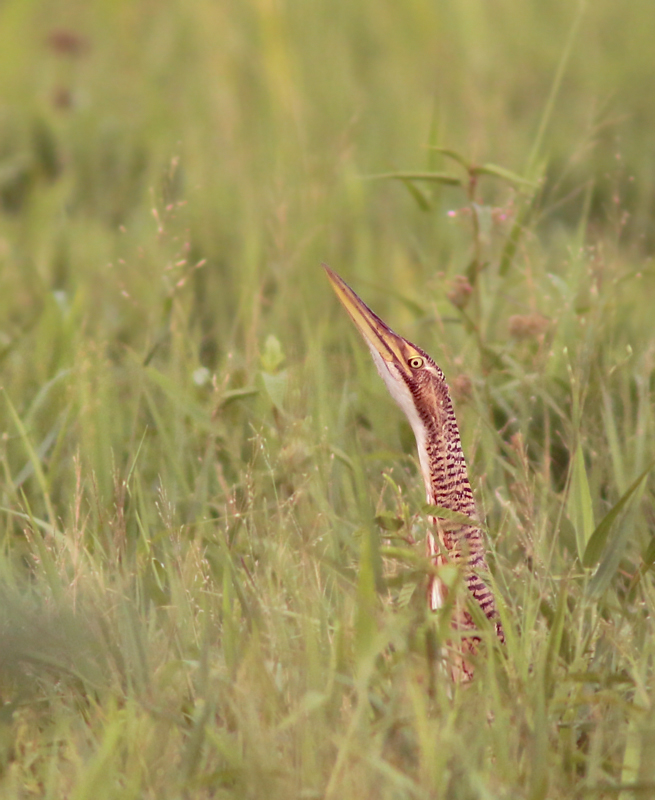 While Pinnated Bittern was one of our prime targets in the Nariva Swamp, finding one can be a real challenge. We were fortunate to spy this one sticking its head up out of the tall grass.

Equally exciting, though much less expected, was this Rufous Crab-Hawk sitting in the open. What a beautiful bird, and very uncommon to see! 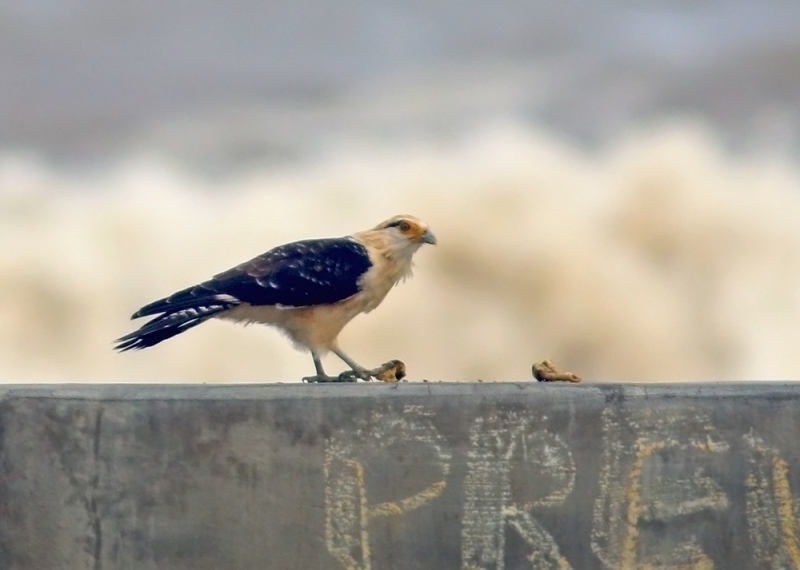 Another beautiful raptor of the lowlands, and much more common, is the Yellow-headed Caracara. We spotted this one having lunch on an ocean breakwater.

We were lucky to have great looks at several Great Antshrikes during our time on Trinidad, including a pair that could often be found near the parking area at Asa Wright.

Woodpeckers run the gamut from drab & boring to bold & colourful. This Golden-Olive Woodpecker is definitely among the latter – what a looker!

A visit to the west coast of Trinidad gave us an opportunity not only to find some great birds, but also check out some cultural and scenic sites. The “Temple in the Sea” at Waterloo is a beautiful spot, and a real monument to both human spirit and the country’s rich Hindu culture. 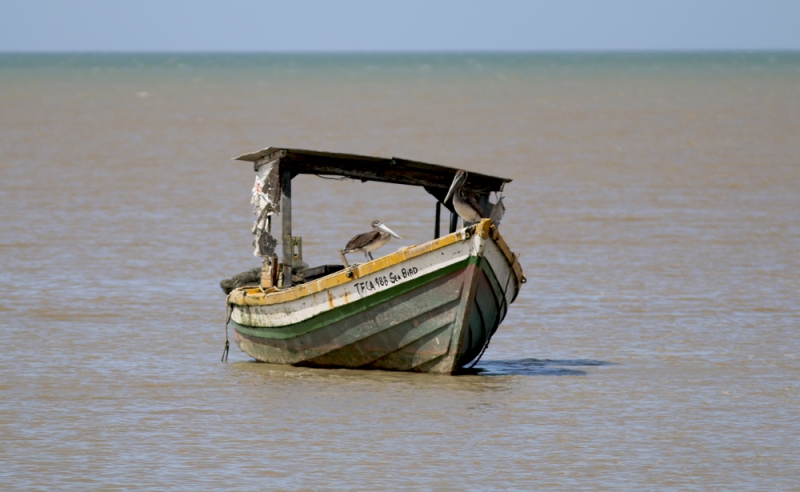 The coastal scenery was also dotted with birds – many of which we wouldn’t see elsewhere. Here, a Brown Pelican sits on a local fishing boat moored in the bay.

We also enjoyed watching a flock of Black Skimmers working cooperatively to find and catch food. Notice the outskirts of Port-of-Spain (Trinidad’s capital city) in the background. 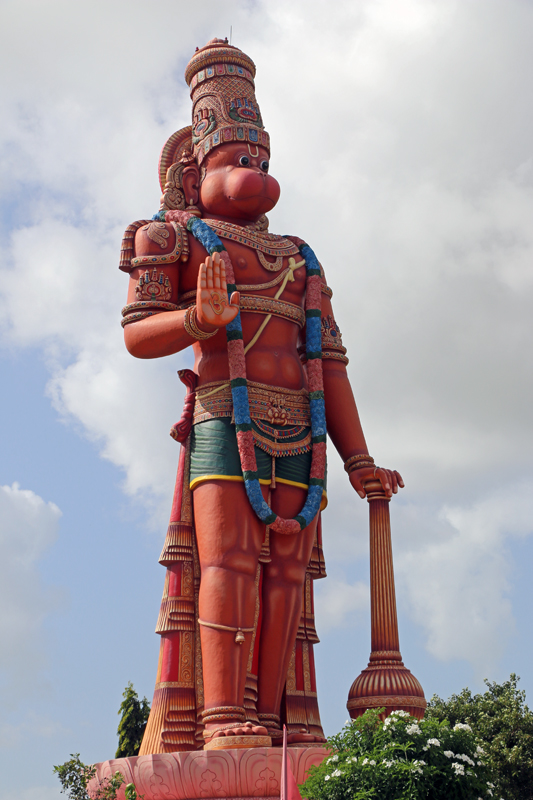 We also took time to visit the nearby Dattareya temple, which is home to this 85ft Hanuman murti (statue) – the largest outside of India.

A late afternoon boat tour into Caroni Swamp proved to be both fun and birdy. Among highlights were our only Green-throated Mango, Straight-billed Woodcreeper, and Masked Cardinals. We also spotted this large Tree Boa (Corallus ruschenbergerii) taking a nap in the mangroves.

The climax of this boat trip, and a major highlight of the entire tour, was seeing hundreds of Scarlet Ibis (and many other herons/egrets) flying into roost on a single island before dusk. What an amazing, colourful spectacle!

What a great way to end the Trinidad portion of our tour! Stay tuned for the next installment and our visit to Tobago!

Click here to read Part 3 of our adventure in Trinidad & Tobago!