For a place that boasts the world’s largest colonies of Leach’s Storm-Petrels, it is surprising how rarely most Newfoundland birders get to enjoy them. More than 3 million pairs (yes – pairs!) are estimated to breed on Baccalieu Island at the northern tip of the Avalon Peninsula and 600,000+ pairs in the Witless Bay Ecological Reserve alone! However, Leach’s Storm-Petrels spend the daylight hours far out to sea, feeding on plankton and small fish. Storm-petrels themselves are perfect meals for larger predatory birds like gulls, so they prefer the extra safety that comes with staying far away from land. Only at night, under the cover of darkness, do these robin-sized seabirds come back to their island abode and sneak into the safety of their underground burrows.

The best times to catch a glimpse of these mysterious birds are during strong onshore winds, when some get blown closer to shore than they would usually bother coming. Occasionally, during a really good windstorm, large numbers get driven onto shore or into large bays. Late last week, a night of northerly gales did just that – and I headed out the next morning to check for seabirds at bottom of Conception Bay. Arriving at Holyrood, I immediately saw dozens of Leach’s Storm-Petrels flying around offshore, mostly into the wind (which by this point had lessened a bit, with gusts of ~70km/h). Setting up my scope, I began to see hundreds of them coursing over the water further out in the bay. Although these winds sometimes bring in other seabirds such as jaegers and shearwaters, I saw nothing else unusual in my two hours of scanning. But it was still an awesome chance to watch, learn and appreciate the enigmatic little Storm-petrel.

I managed to find one place where Leach’s Storm-Petrels were filing by occasionally within camera range, but bright sunshine and strong winds made photography difficult. 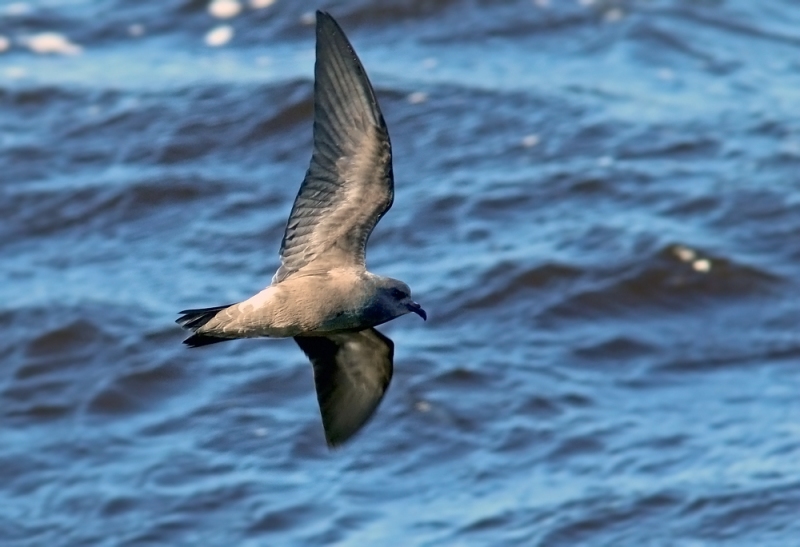 The bright sun and strong shadows ruined would otherwise have been a great photo opportunity.

This photo was taken at the same location two years ago, during strong wrap-around winds from Tropical Storm Cristobal (August 29, 2014). Winds like these make for interesting birding in September and October.

Leach’s Storm-Petrels are more familiar to fishermen and sailors who also spend much of their lives on the open ocean, and are known by many as “Mother Carey’s chicks”. I have always wondered the origins of this colourful name, which seemed nearly as mysterious as the birds themselves. I recently saw an intriguing old drawing of a witch flying on a broomstick, surrounded by storm petrels and overlooking a sailing ship in a raging storm. It turns out that, according to some folklore, Mother Carey is a name attributed to an old hag that brings about cruel and dangerous seas. Some even claim she is the wife of “Davy Jones”, the mythological figure who is blamed for causing shipwrecks and claiming the bodies of drowned sailors. It is no surprise, then, that such an otherwise innocent-sounding name has been given to a seabird that is often associated with stormy winds and weather.

Leach’s Storm-Petrels are also well known for getting stranded on land at this time of year. With millions of young birds fledging for the first time, and parents following suit to abandon their burrows until next year, there are lots of opportunity for mishaps. Storm-Petrels can get disoriented by the bright, artificial lights that are so common around our communities – especially on damp, foggy nights when visibility is limited. Like many seabirds, Storm-Petrels are unable to take flight from flat land (they usually launch off their sloped burrow entrance), and are easily stranded if they land. If you find one, gently pick it up, place it in a dark ventilated space (a small box works well) and release it over the water that evening. Doing so after sunset is best, since there is far less chance it will get predated on by larger birds.

We rescued this Leach’s Storm-Petrel after finding it stranded at the base of Cape Race lighthouse on September 25. Although stranded birds may “appear” injured as they sit motionless or sometime flop around on the ground, in most cases they are healthy and simply cannot take off from land. We released this one over the water at nearby Cripple Cove.