I was leading an Eagle-Eye Tours trip in Ontario (Point Pelee, Rondeau, Long Point & Algonquin) when I first heard the news … a brilliant adult PURPLE GALLINULE was discovered roaming on the Waterford River in St. John’s – just minutes from my house!! Despite the fact I was enjoying awesome birds & birding in some wonderful places, there was still a sting to knowing I was missing such a great bird on my home “patch”.

As luck should have it, this colourful visitor from the south decided to stick around — and I arrived home in plenty of time to catch up with it on May 16. What a stunner!

After missing this bird on my first attempt to see it on May 15, I was very happy to spot this bright purple head poking out of the grass the following morning. What a sight in urban St. John’s!

After a few minutes, this beautiful bird graced me by wandering out of the grass to forage along the river bank, sometimes in plain view and other times disappearing into the grass. It was wary, but not frightened by my presence as I sat quietly nearby.

Purple Gallinules are residents of marshes and other grassy wetlands from the southern United States to South America, so very much out of place on a river in eastern Newfoundland. In fact, before this I had only seen this species in Honduras and Trinidad & Tobago! This individual may have arrived on strong southerly winds of late April, which also brought warm weather and numerous herons/egret to Newfoundland at that time. With its secretive habits, it could easily have went unnoticed for the next few weeks until it was reported by some fishermen on May 12. It seems to be healthy and doing well, still present as of at least May 23 (although I imagine it has struggled with the cold weather of the past 24 hrs as I write this). 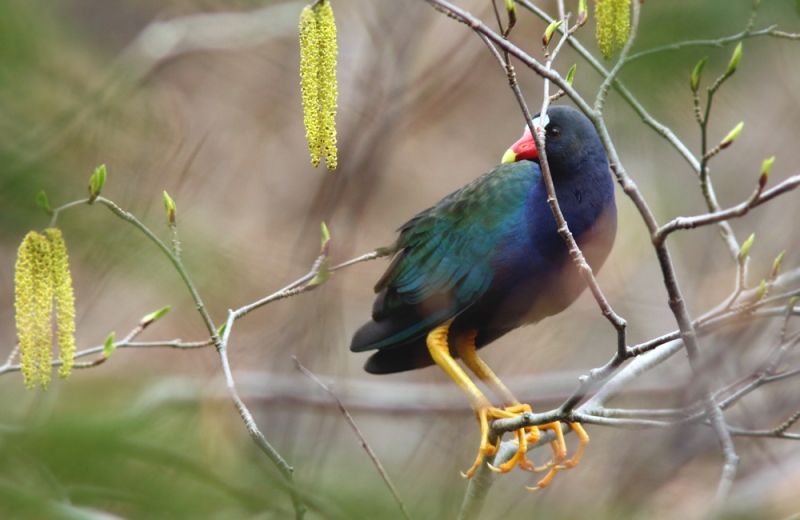 Surprisingly, the gallinule even flew up and perched in a tree above the river for several minutes – something I haven’t heard other observers report during its nearly two weeks so far. What a wonderful experience!

Incredibly, Purple Gallinule is a more regular vagrant to our shores than you might expect. This bird represents ~30th record for the island, but the first that has “chasable” by local birders and/or has been seen for more than one day. Most records are in late fall or winter, and the majority of those immature birds that are more prone to vagrancy. Many have been found moribund or already succumbed to the elements and its long journey north. A bright spring adult was a real treat — and a great “welcome home” surprise after my own wanderings!