Wow! After not being seen for almost three weeks, I was shocked today when local birder Doug Smith reported seeing the PINK-FOOTED GOOSE at its original location in the Goulds!! It was seen again in the late afternoon in a nearby field, looking very content and settled as it milled about and grazed with local starlings. (Check out Bruce Mactavish’s blog for more details and photos of the latest sighting.)

Not only is this a major North American rarity (ABA Code 4), but it was only the second fall and now first winter record for Newfoundland. More importantly, according to my records, it is now the 250th species to have been recorded in Newfoundland during the “official” winter period (December thru February)!! This is a very impressive number considering our climate, location and the fact that the total number of species recorded here in any season is just 400.

To keep tabs on the Pink-footed Goose, check the “rarity round-up” page for updates … I’ll try to keep it as current as possible.

Unlike the past few years, it was no trouble to believe that winter was here when I looked out my window on December 1st. After an unusually mild fall, temperatures had dropped off suddenly during the last few days of November and the ground was coated in snow & ice. It’s a bit of a shock to the system, but one I can adjust to.

I actually like winter. Not so much the shoveling or chipping layers of ice off the windshield before heading off to work, BUT there is something about it that turns my crank. And “winter birding” is certainly a big part of that … 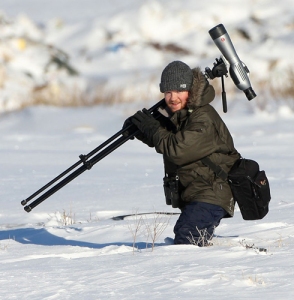 In my natural element … This photo was taken by Bruce Mactavish during one of our very regular winter gull outings.

“Winter bird lists” have become popular across Canada in recent years. Some birders keep their own personal lists, and most provinces keep a cumulative list of which species have been reported during the “official” winter season (December thru February). I began doing that for Newfoundland six years ago (Winter 2006-2007) and will be doing it again this year – keep tabs on the “Winter List 2012-13” link at the top of the page for regular updates!! As anyone who has explored this (slowly) growing website would have figured out by now, there is something I enjoy about “bird records” … not just the “now” birds that I can chase and see, but the stories, history and patterns that can be drawn from records over time. And maintaining the Newfoundland Winter Bird List each year is one way I can contribute to that interesting and important knowledge over time. 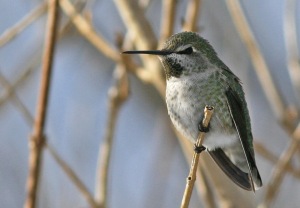 This Anna’s Hummingbird was one of the amazing records that highlighted the incredible winter of 2010-11! It was a first provincial record and survived frigid temperatures well into February at a feeder in Brownsdale, Trinity Bay.
– Photo: Jared Clarke (January 26, 2011)

Most winters, about 130-140 species are reported around the island (plus a few more from Labrador). Two years ago (2010-11), we tallied an incredible 150 species – a record that will be tough to beat and a winter that will go down in history for so many reasons (to find out more, check out this summary). To the best of my knowledge, and with the help of several seasoned birders, it seems that a grand total of 247 species have been recorded here during the winter period – a mind-boggling number for this rock of an island. 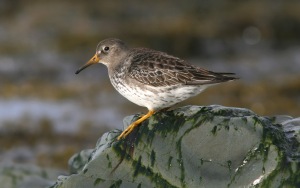 This Purple Sandpiper, on the other had, is one of the winter visitors we look forward to every year – a hardy soul, nonetheless.
– Photo: Jared Clarke (March 20, 2009)

So … if you’re lucky enough to be one of us spending the winter here in beautiful Newfoundland, get out there and start birding!! And if you see something interesting and/or not currently on the list, let me know!!